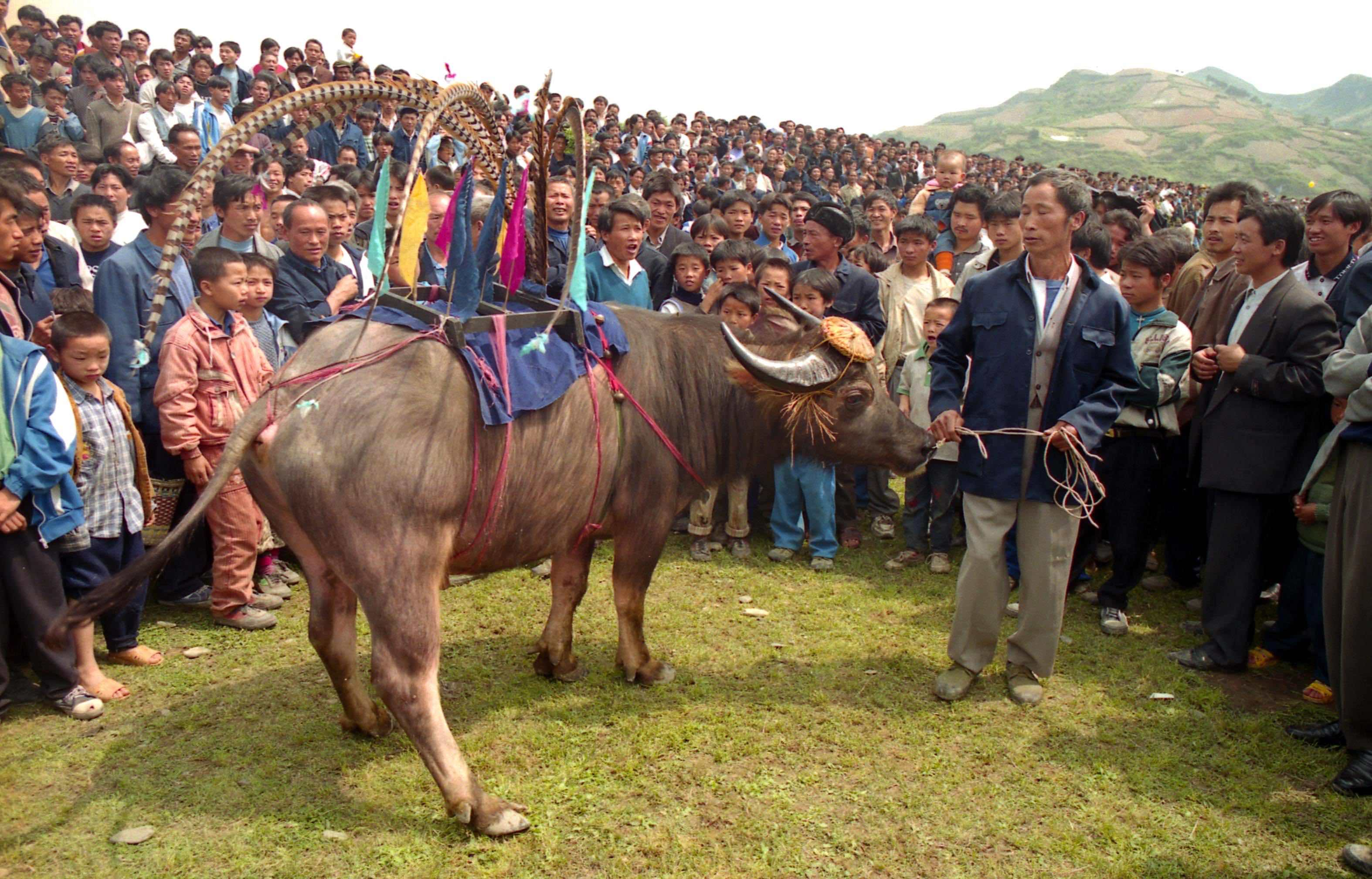 The Miao (Hmong) ethnic group of Qiandongnan – southeastern Guizhou province – are hill-dwelling farmers, best known in China for their embroidered jackets and complicated silver assemblages that women wear during the many festivals dotting the Miao calendar.

Buffaloes – aside from their obvious agricultural uses – crop up everywhere in Miao life (not to mention the fifty or more places in Qiandongnan called Niuchang, “Buffalo Market”). They appear in mythological poems and as decoarative motifs on men’s jackets, they get sacrificed as ancestral offerings at various times of the year, and are paired up to fight each other at most – perhaps all – Miao festivals.

These buffalo fights aren’t as cruel as they might sound. Like many farming peoples in China, the Miao look on their buffaloes as workmates in the fields and often treat them with real affection, taking care to groom and look after them and even decorating them in red ribbons for public events. True, injuries do happen at fights, but bulls are usually separated if things get too serious; animals rarely kill each other.

In fact there’s usually more danger for the spectators than the buffaloes at these events. The first two I went to – one at a traditional funeral in the highlands of Sulawesi, Indonesia, the other at the annual Sisters Meal festival at Taijiang, in Guizhou – were held out in the open, with no protective barriers for the audience to hide behind if things got rough.

As a guest of honour I was pushed to the front on both occasions. The two animals launched themselves at each other, collided with a titanic crash, locked horns and began wrestling head-to-head, foaming, snorting and scrabbling for footholds in the dirt. After a few moments the weaker bull turned tail and ran, chased by the victor, scattering spectators like confetti. I was lucky that they always seemed to run away from me.

About the Author: David Leffman is a travel writer and photographer. He was one of the original writers for the Rough Guide series, and has been visiting China since the 1980s, writing and photgraphing, including accompanying George Michael on his historic visit. His latest project has been researching Victorian era adventurer William Mesny and his excellent book, The Mercenary Mandarin, is available on Amazon. More information about him can be found on his website: www.davidleffman.com