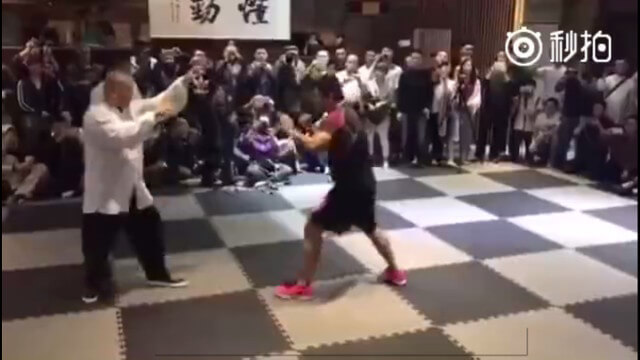 Here in China everybody is talking about this MMA vs Tai Chi fight. Basically Xu Xiao Dong is the father of MMA in China. Although he hasn’t actually had any fights per se, he is responsible for establishing the sport in China. He started attacking Tai Chi on social media, calling the majority of masters phoneys who can’t really fight. One man, Wei Lei, founder of Lei Gong style Tai Chi, took up the challenge, claiming he could get out of a reverse choke with just one hand. A fight was arranged, and Xu Xiao Dong flew out to Chengdu to fight Wei Lei. As you can see the fight was over very quickly. Now Xu is basking in his glory, and calling out more people. Chen Village and Wudang have been his main targets.

So, as a Kung Fu practitioner, what do I think about this situation? Well, I think it is really good for

Chinese Martial Arts. In China, words like “master” and “high level” are thrown around way too easily. Almost any middle-aged man in white silks who has a half decent form gets called those words. Tai Chi is notoriously bad, as they make many mystical claims, their egos growing as big as the fantasies they live in. Sure, they can do some Push Hands tricks on cooperating students in the park. Its easy to say “the soft overcomes the hard” or “using four ounces to repell a thousand pounds” when the student is just tensing up on the spot as an examples of “hard force”. These guys need a reality check, while their egos are inflating on a daily basis, they are giving Chinese martial arts a bad name. This is not to say Tai Chi itself is inherantly bad, I have met some good practitioners, and Push Hands does have a lot of value IN THE RIGHT SITUATION. If Wei Lei had prepared himself to deal with the aggression of a real fight, I think his Tai Chi would have come into play once they closed the distance and got into grappling range. The problem arises when these people make big claims, but can’t back them up with real fighting experience.

There is tremendous value in genuine Chinese Kung Fu. I wouldn’t have packed my bags and moved across the world for ten years if there wasn’t. It was developed on the battlefield, refined by great generals, before being disseminated among the common people. Not only does it have excellent strategies and techniques for combat, but it is a holistic system for living, covering all aspects of life. The problem really, is how over the last hundred or so years, it has gone into a decline. There are still many people who can and do fight. My hope is that the recent events will bring them into the spotlight, the good guys will take up the challenge and the people who can’t fight, but make big claims, will take a long look in the mirror, and make some changes. This is a perfect opportunity for Kung Fu to move forward into the modern world, to embrace modern combat sports without losing its values.