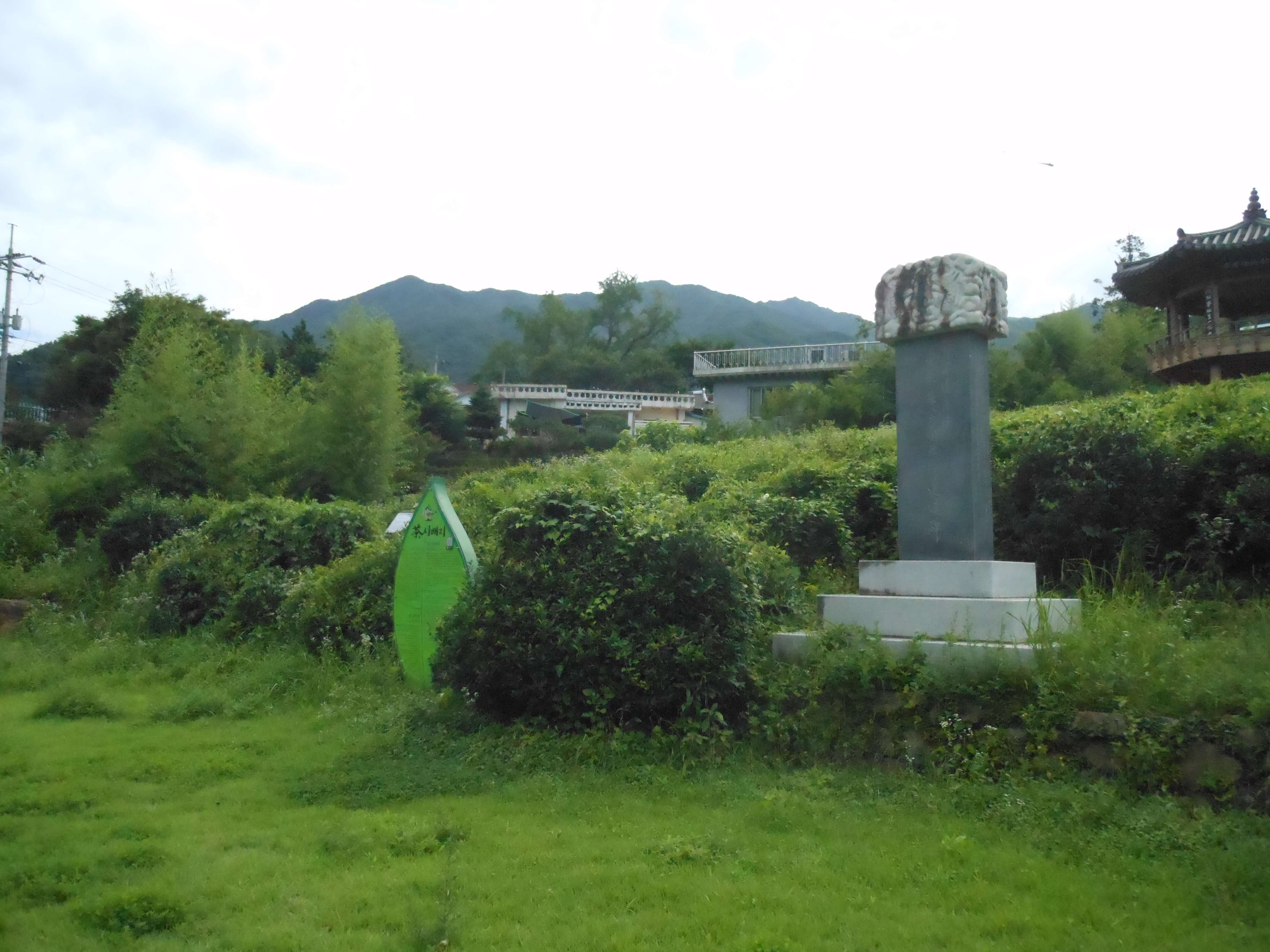 Jirisan is a mountain range in the far south of South Korea. The surrounding county, Hadong, is home to Korea’s “wild tea”, which has been cultivated here for over 1000 years.
I arrived late in the afternoon with my wife and we took a bus through beautiful scenery following the river to the village of Agyang. We got off the bus and walked up the hill to a quiet and quaint little village of traditional Hanok houses. There were a lot of shops selling pottery and tourist souvenirs but they were all closed, it seemed as if we had the village almost to ourselves!
After a dinner of local noodles we found a small shop selling the local tea and had our first try. It was the first pick of the year, before the rain season. The green tea was smooth and had a note of toasty rice to it with a fresh finish. We drank about three pots and then headed to bed.

Ssangyesa Temple: the Most Important Site in Jirisan

We got up early and took a 30 minute bus ride to Ssanggyesa, passing many tea plantations on the way. When we arrived the first thing we did was go to see the original tea plantation which was started by Dae-Ryeom, who was sent to China as an envoy in AD828. Since then, the field has been preserved and the current tea trees are unkempt, left to grow naturally, and so it is called “wild tea”. I picked a few buds off a bush to take back and brew later.
After that we headed up to the temple, which is the first Korean one I have been to. A major difference from Chinese temples I noticed is that it is an active place of worship ad cultivation, rather than a tourist site. As you enter the temple signs appear in multiple languages asking for silence. There were several natural wells you could drink mountain water from, which I collected to brew my tea leaves I picked with.
The temple is also famous as being the place where abbot Jingam created Korean Buddhist music after studying in Tang Dynasty China.
Hiking up the beautiful trail behind the temple the only people we saw were monks on their way to a meditation retreat in a bamboo grove. There were truly wild tea trees growing on the side of the path, which looked as if they had been heavily picked, I’m guessing by the monks who do produce their own tea.
Later, we headed back to the village for lunch, which was a vegetarian meal consisting of lots of small dishes, one of which was tea leaves pickled in vinegar (unfortunately, I can’t say I was a huge fan of it).
In the afternoon we first visited a small shop and sat with some local monks drinking a black tea. The Hadong black tea was fairly light, quite similar to Tanyang Gongfu, a Chinese variety from Fujian. I personally think it would have been better had it been brewed with more leaves. After we left the shop we saw a very old woman by the roadside selling herbs picked from the mountains. She had some rough tea leaves in a bag for a very cheap price, which we decided to buy. As you would expect from rough leaves the flavour was fairly course and bitter, actually it reminded me of cheap green teabags you would buy in the UK supermarkets.

Just below that original tea plantation I mentioned was the Tea Culture Museum. The museum exhibition itself is really of little interest, with some inaccurate information on the history and classification of tea, and some pieces of ancient teaware, but one part that did interest was offering hands on lessons on making green tea as well as performing tea ceremony. Unfortunately the making tea lesson was only available to groups of people who prebooked, but we did get to try our hand at Korean tea ceremony.
I will talk about the ceremony later, first I want to mention the teas we tried and bought in the museum shop. The green tea was excellent. We tried a “pre-rain” first flush, the cream of the crop so to speak. It’s flavour was bold and powerful, but not overwhelming. Unfortunately this tea was way out of my price range, so I went for a third flush, which still didnt come cheap. We also tried a Wulong, which to me tasted very similar to a light black tea, different to Chinese or Taiwanese wulongs.
On the whole, the Hadong wild teas are very good, especially the greens. They are expensive which I think is due to several factors; the small amount grown, the organic and fully handmade processing and for Koreans it is a national pride. I have often found, like in Britain, the Koreans will pay much more for locally made produce than for imports, while China is exaclty the opposite.
In the tea cultural centre they were offering free classes on tea ceremony. The lady who taught us was very cultured and polite. The first thing we learnt was how to properly sit, and how to handle the tools. Sitting should be kneeling, but you must not step your feet on the cushion as you kneel down. When you handle something you should use your right hand, palm up, and the left hand also palm up pointing at your right elbow.
To start the ceremony you bow and say to the guest “차 한잔 드십시오” (tsa hanzan te sip siyo), which means “please enjoy a cup of tea”. The tea ceremony is more ritualised than a Chinese ceremony, but simpler than the Japanese one. The ceremony is full of Confucian etiquette, with a definite hierarchy of who is given tea first and who drinks first. It generally starts from the oldest male present.
The room was layout was very beautiful, all wooden with tea sets layed out on the floor and a risen platform at the front where the teacher would give lessons to larger groups. It gave me the feeling of an ancient Chinese Confucian academy. I think Korea does a very good job of protecting and preserving the traditional culture, but they don’t always give due credit to their Chinese influences. I wish in the future I can see China work harder to promote these kind of activities as they have so much to offer.