Longjing is without a doubt China’s best known green tea and it is grown by the side of the West Lake in Hangzhou, just a few minutes drive from General Yue Fei’s tomb that I wrote about in my last post. I decided to visit the Longjing village to try the tea at its source, as well as to hopefully visit some plantations.

I arrived at the Weng Family Village, one of fours villages in the Longjing village area which produces the authentic tea. Walking through the village its immediately apparent the wealth here; for a Chinese village the houses are built incredibly well, and there were expensive cars parked outside every one. Towards the top of the village is a well, the sign explained that it was the original Dragon Well, from which Longjing takes its name (longjing means dragon well in Chinese). Several old women sat on a bench next to the well, and as soon as I approached they got out their buckets, asking me if I wanted to wash my hands and face with the water. Nothing comes free in this world, and it seemed odd how pushy they were offering these buckets “for free”, so I politely refused them. They then started pestering me to go and buy tea at one of their shops. I left, and continued to stroll, hoping to find a decent shop where I could try the local tea without being pestered.

I was in luck, I chose one quiet looking shop at random, and this old lady was sitting inside with a sweet smile. She invited me to try some tea, and I could immediately tell she was different. It turned out that she was a member of the Weng family, and had been growing tea for generations. Her husband was the tea master, and she was in charge of running the shop. She also told me I was smart for not touching the well, as althought it was the real Dragon Well, the water inside was currently polluted as so many people had moved into the village and built substandard bathrooms that essentially pumped sewage straight into it! These were the same people pestering visitors at the well in question!

I tried her green tea, as well as a Longjing black tea…. something I never even knew existed! It was really good though; a light and fresh black tea, very different to your normal Chinese blacks. Anyway, I will leave it there, and let you enjoy the video of my trip there. 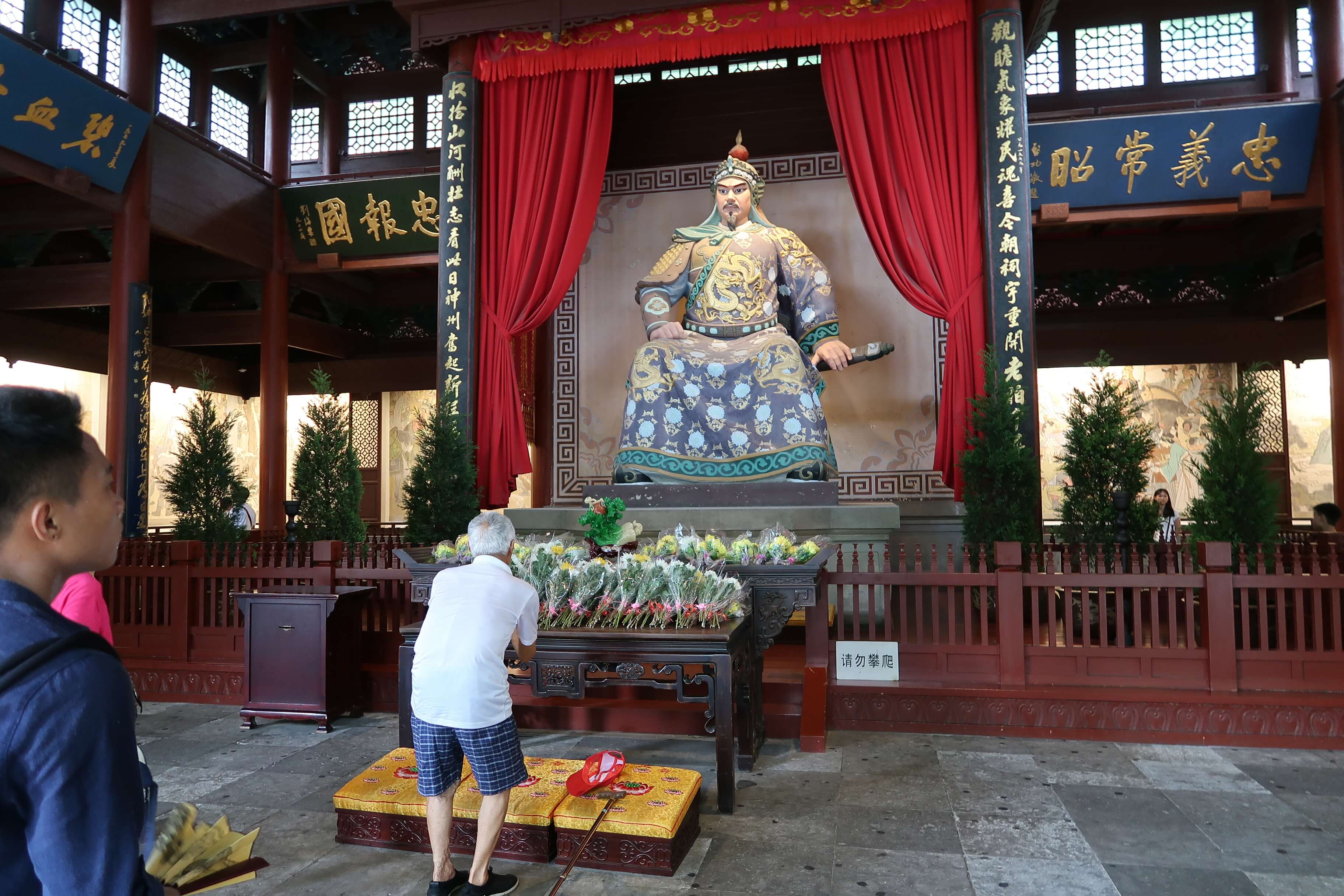 Hangzhou, in Zhejiang province, is only a 90 minute journey by high-speed train from Shanghai, and the city centre doesn’t feel a whole lot different. What is different, however, is the amount of culture and history surrounding the West Lake. Of particular interest to martial artists, as well as patriotic Chinese, is the tomb of General Yue Fei.

Yue Fei was a general in the Southern Song Dynasty (1127-1179). The Song Dynasty was a period of strong cultural developments but very weak military. The emperors were focused mostly on pursuing art and poetry, and neglected the defense of their borders. As a result, they were constantly plagued by raids from nomadic horseback peoples from the north. One such group, the Jurchen, grew to great strength and eventually sacked the capital of Kaifeng (in today’s Henan province), claiming it as their own and setting up the Jin Dynasty. The Song court fled south, and set up their new capital in Hangzhou. In fact, the Jurchen are the very same people who founded China’s last Dynasty, the Qing, after renaming themselves the Manchu hundreds of years later.

Yue Fei was a native of Henan province, and made it his lifelong ambition to retake his homeland from the northern Barbarians. At a young age he began his martial arts training by learning archery and the 18 weapons from legendary figure Zhou Tong. He later learnt and mastered the spear, which became his speciality from Cheng Guang. It was this spear technique that, according to legend, influenced him to create an empty hand fighting style, known as Xinyi-Liuhe Quan. This style was based on Liuhe (six harmonies), which in essence meant the body moving in unity, much as you would move wielding a spear. How much of this is fact, and how much is pure myth is pretty much impossible to ascertain. But what we can take from this, is that as many modern martial arts styles claim descendancy from his original technique, he was a figure worthy of martial artists admiration. I put this down to his efforts to fight the Jurchen, a notion which many creators of contemporary martial arts could empathise with, growing up under the Manchu rule where Han were considered second class citizens.

Yue Fei was eventually betrayed by a group of people, led by Qin Hui, and wrongly sentenced to death. In front of his grave you can see several bronze statues of these traitors, forever cursed to kneel in front in a gesture of begging forgiveness. It’s normal for Chinese visitors to the tomb to spit on the statues or wave their hands and curse them. Something which there are now signs up asking tourists not to engage in.

Yue Fei was post-humously pardoned, and this large temple and tomb was set up for him by a later emperor. Since that time, its been customary for both martial artists and patriotic Chinese to come to Hangzhou to pay their respects to the general, as did I on my recent trip to Hangzhou.