On the second and third day in Manila, Arnold had a couple of students take me around Manila to see some of the sights. The first day, we went to Intramuros, the old Spanish colonial area of town. Intra means inside, and so this area is surrounded by a huge stone wall, built by the Spanish to protect themselves from uprisings or invaders. There are a few cobbled streets and many old houses and churches in this area. It is much quieter than the rest of Manila, and so is relaxing to walk around. We visited Fort Santiago, as well as a renovated Spanish house and a museum about Chinese-Filipinos.

Later that evening we went to Mall of Asia, the largest shopping mall in Asia, for a buffet and some drinks. Arnold and the students were celebrating their victory in the Macau lion dance tournament.

The third day I spent exploring Chinatown and more of Intramuros, before heading to Quaipo Cathedral and the large market behind it. The market is a haven for pickpockets, and it only took five minutes of being there before I had an old lady following me, constantly trying to stuff her hands in my pockets! She wasn’t even discreet about it! They have this idea that all white people are rich; but comparatively we are, as the level of poverty here is high. The market sells all kinds of things from amulets and charms, to folk medicine and fake DVDs. I didn’t buy anything though, I think I may go back another day to look at the amulets, and explore the Muslim district nearby.

Later we went over to Arnold’s school. The school is sponsored by the KMT, the government of Taiwan, so there are a lot of pictures of Chiang Kai Shek and Taiwanese flags up. Out of nowhere, Arnold asked me to teach the class. Without any preparation, I stuck together and warm up, did some stretching, then took the students through the basic stances of Taiji Mantis, showing them how to check their structure. I then introduced them to some basic partner exercises as well, arm conditioning, and Jie Hai Chui, and then adding some basic applications in. The students demonstrated some forms for me, and I showed a few Taiji Mantis forms to them as well.

For me, this was just day 3 in Manila, but was the last chance to hang out with them, as in the morning they left for Sinagpore, to take part in a lion dance competition. They really treated me well as a guest and I had a great time with them. I hope I can visit again, or they can come and visit me too. 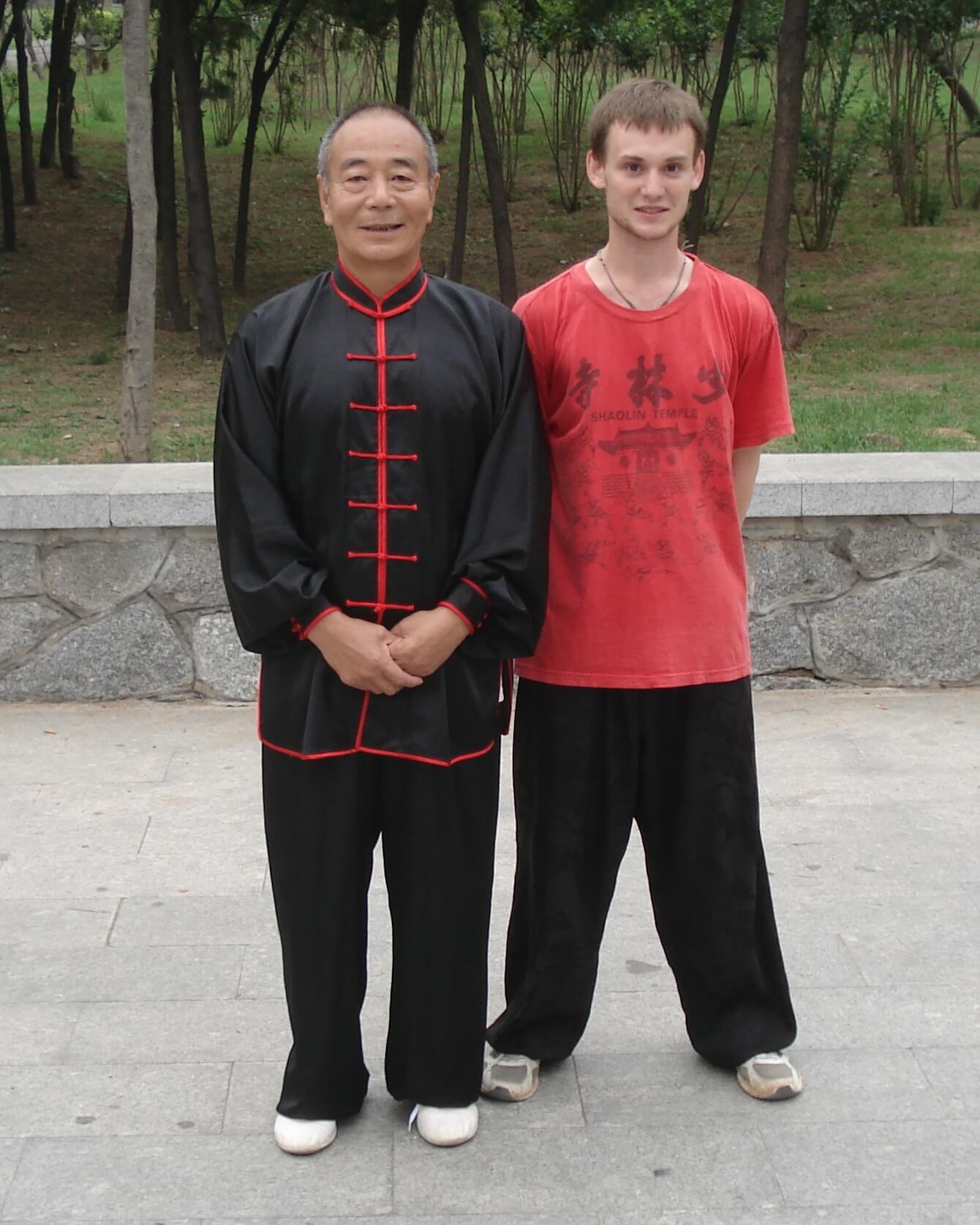 I’ve celebrated Chinese New Year more than a few times in Asia, whether it was with the remote Dong people in the mountains of Guizhou, venerating the Jade Emperor with ethnic Chinese in Malaysia, or watching a rock band in Singapore. However there’s one particular New Year I remember well. My teacher, Master Zhou, invited me to spend it with his family, and took me to visit his kung fu elders. For the Chinese, New Year is somewhat akin to Christmas, and apart from getting loads of presents from Santa, the atmosphere was very similar.

For New Year’s eve we made dumplings, which is a New Year’s tradition. First we made a small batch of vegetarian ones, which were to be offered to Buddha later, then we made the meat ones for ourselves. As the night drew in, the sound of fireworks filled the air outside, every few seconds you could hear great big bangs and the spitting sound of crackers. Master Zhou and his wife offered the vegetable dumplings to the Buddhist shrine in their living room, then lit incense.

Master Zhou took me outside to set off fireworks, which is something Chinese people love. No matter how small a celebration, they will set off fireworks, whatever time of day! The fact that the Chinese invented gunpowder to celebrate, but the Europeans turned it into a weapon, is something not lost on the Chinese. Something I had always wondered about in China was why people always light little fires on crossroads at night. Master Zhou explained is to burn offerings to your ancestors as he took a wad of “death notes” from his pocket; which are large pretend notes of money. He drew a circle in the snow on the street and made a little fire with paper, which did little to relieve my chapped hands. This way his ancestors would have money to spend in the afterlife and wouldn’t cause trouble to the living. Then we went back inside, lit incense to offer to his late master and his parents, followed by a huge dinner of traditional Shandong food and some weird Chinese “medicinal” liquor.

I was woken up at about 5.30am by the sound of firecrackers ouside my window! The sound continued every few seconds for the rest of the day. I arrived back at master Zhous apartment and there was plates of nuts and nibbles on the table, with a few disciples sat arond smoking. All through the day, family members and students would stop by to wish happy new year to Master Zhou, including a star from a local TV station. Once the coming and going settled down, we went to visit some kung fu elders and give them some small gifts.

The first stop was Master Zhou’s late master’s wife. She is 103 and lives with her son, who is also a well known master. She was partially blind and deaf and laying in bed. She just looked so old, and just grumbled. It was amazing to think she was born in the Qing dynasty, when there was still an emperor on the throne! The things she must have seen as China changed, but as age had caught up to her, I was unable to ask her anything. Next stop was to visit an early disciple of Cui Shou Shan. He is one of the last few people alive who trained directly with the great master, and lived in a very basic, old house. When we left, he looked Master Zhou in the eyes and, clasping his hand with both of his, said “You must do your best to pass on Taiji mantis to more people, you have learnt the system more thoroughly than any of us, don’t let it be forgotten.” That was moving for me, to see that old man say it in such a heartfelt way, it confirmed that I am training under a great master.