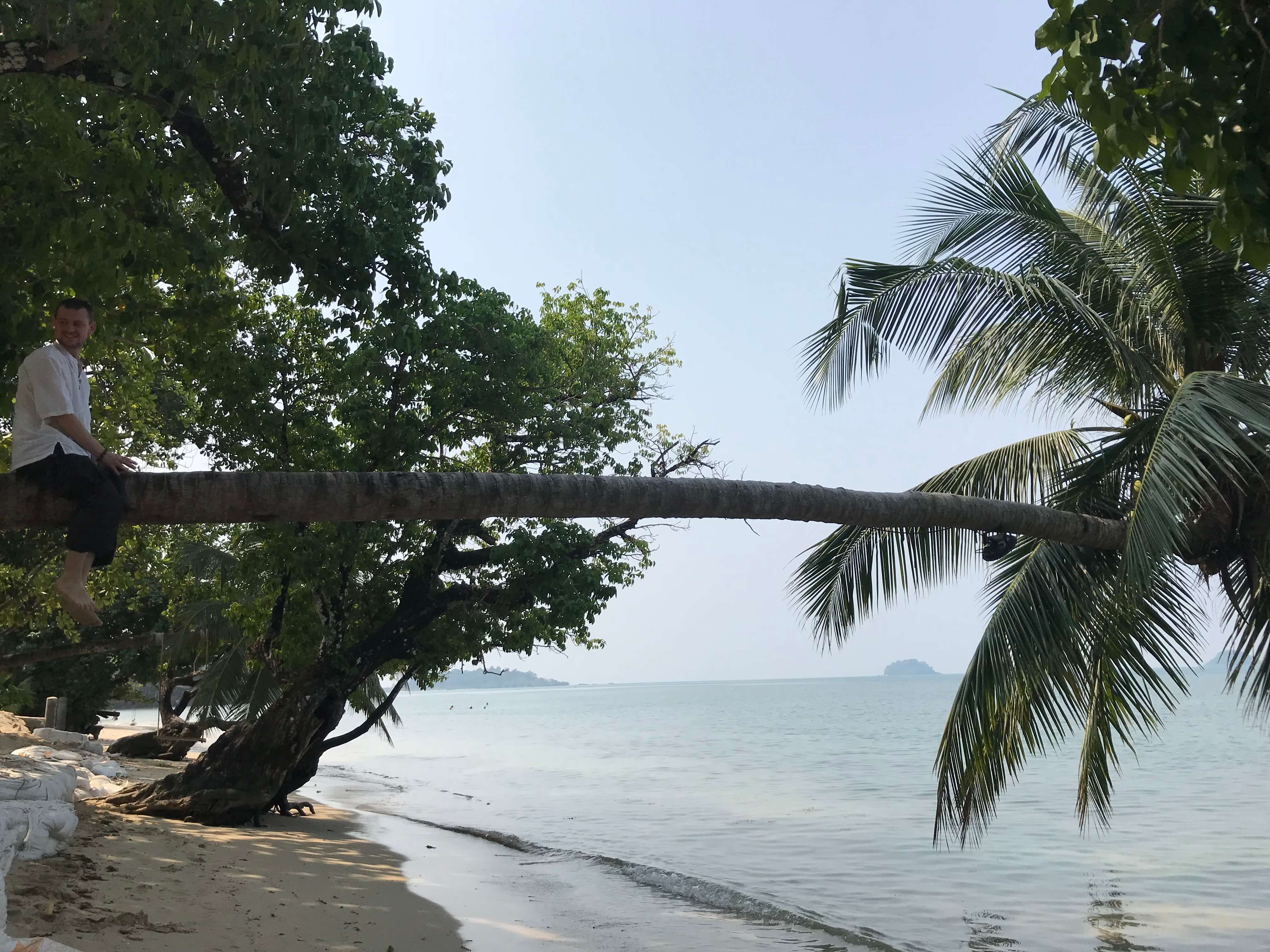 I’ve been in Asia eleven years now, and still never been to Thailand! I decided to change that, and got in contact with my friend Kieren Krygier, who runs The Martial Man, and he suggested I go to Koh Chang. Koh Chang is Thailand’s second largest island, and is right up on the border with Cambodia.

How to Get to Koh Chang

The island itself has no airport, but you can fly to nearby Trat and then take a ferry across. However, this is an expensive option, and so your best bet is either a taxi from Bangkok (about 4500 baht) or the cheapest but least comfortable is by bus. The journey is about five-six hours. Note that if you book a taxi via an online service, they will include the ferry ticket in the cost. We went with the taxi, as my wife gets car sick easily.

Basically there is one road which goes around two thirds of the island, with almost all activity based on the west coast. There are several small towns along the windy and sometimes steep road which clings to the jungle-clad hills of the island. These towns are centered around a beach and are made up primarily of hotels, restaurants and other facilities catering for tourists; locals make up a very small population of fishermen and fruit farmers. We chose Kai Bae beach as by all accounts it was the most chilled out area, without the rowdy parties of the areas like White Sands beach or Lonely beach.

For our week long stay, we stayed in two resorts, Gajapuri Resort and Awa Resort, which were right next to each other. Of the two, we prefered Gajapuri as it had a more personal feel. From the moment we checked in, the staff were constantly smiling and very friendly. We had some problems with our wifi, but nothing seemed like too much trouble for them. All of the rooms were small wooden huts, which were cool inside and had all the amenities you could need. The private beach was very small, but had several swings hung from palm trees right over the sea, which was a nice touch. You could have drinks or dinner on the sea, or even a massage. Awa was very nice too, I can’t say anything bad about it but it had a more commercial, large scale feel to it. We booked a beachfront room and somehow got upgraded to a suite! The rooms were all in one large building, which didn’t feel as intimate as Gajapuri’s individual huts. The deco was very cool though, very modern but with lots of Chinese ornaments and calligraphy, giving it a museum-like feel. Awa didn’t really have a proper beach though, there was an area of sand, and then a sudden drop off into the sea, but they also offered massage and drinks overlooking the sea which was nice. Breakfast had a massive buffet, more variety than Gajapuri, I guess as there were much more guests.

As I said before, Koh Chang is mainly just a great place to chill out. The biggest draws are definitely diving/snorkeling, or trekking in the jungle. We went snorkeling with the company BB Divers. I had a look around at various diving companies, and decided either BB Divers or Scubadawgs were the best choices. They provide pretty much the same services (the Scubadawgs boat was behind us for the whole day out), but we chose BB just because the website had more information about the various sites. It seems for snorkeling, most people go to the Marine Park, although we chose the shipwreck and some local reefs. The reason for this decision was that the Marine Park tends to get masses of tourists, so I had read, and so while the wreck and local reefs were less suitable for snorkeling, the atmosphere was much nicer. The main downside was that as a snorkeler, you kind of feel like you are just tagging along with the divers; you are just left to do your own thing. We were however, really well looked after by one Chinese instructor and the Thai boat captian, as my wife and our Chinese friends got very seasick.

The rest of our time in Koh Chang was just spent eating, getting massages and chilling on the beach. I had a massage almost everyday, the cost was about 250 baht for an hour, and I tried several places. I didn’t have a bad massage once; all of them were excellent and some of the best massages I’ve ever had!

Should You Visit Koh Chang?

While it doesn’t have the most spectacular beaches I’ve ever seen, I think this is a trade off. The fact the beaches are fairly average (combined with the difficulty of getting here) means less people. While the island pretty much solely caters to tourism, its not overrun with people. The other thing is that you aren’t going to get much in the way of culture, temples or monuments here. Koh Chang on the whole is just a place to come and relax. So if thats what you want, then by all means come here.